Have We Exhausted Our Options?

Resources are finite. Really? The ideas for dealing with scarcity are infinite – alternative processes, recycling, discarding a material. It simply means taking a fresh look at the resource question. Searching for them becomes all the more important.

A person standing on the edge of a large forest or the shore of an enormous lake may find it hard to grasp that they contain finite amounts of wood and water. When we see vistas that stretch beyond what the eye can see, perhaps views of a mountain or a desert, we call them “endless landscapes.” The size of our planet is hard for us to comprehend, though we have an expression, “like sand in the sea,” that refers to seemingly endless quantities. It comes from the Bible, making it nearly 2,000 years old. In this day and age, we use 50 million tons of sand annually. The seemingly infinite supply of sand is running short. Coasts and rivers are eroding. Water is in a similar situation. Nearly two-thirds of the world’s population suffer from a water shortage at least one month a year. And since 1950, a full one-fifth of the world’s forests have been cleared.

Nature`s Treasures: Marble was already a much sought-after material in ancient times. Its quarrying was manual back then, but today machines do the work, as is the case here in Denizli, Turkey.

This in turn has much to do with the sheer number of people, currently around 7 billion, populating our planet. By 2050, the United Nations expects the world’s population to increase to nearly 10 billion. Since resources are finite, it seems as though the planet is unable to support all of them.

Or Are They Finite?

In the 21st century, we doubtless find ourselves in a situation of historic magnitude. Still, shortages of resources are actually not that new. Over the course of history, many societies have faced them again and again. For example, archaeologists have considered the island of Pantelleria an exciting field of research, wondering why people have been living there, of all places, for thousands of years even though it hardly has any water. The researchers found that the inhabitants collected rainwater in cisterns. In the end, shortages of resources spur invention. That was the experience of the Sumerians who built an advanced civilization on the idea of irrigating an arid landscape and conveying water from the Euphrates onto their fields. The idea was not sustainable, however, even if the difficulties only became apparent over the course of centuries. Evaporation salinized the soil, making it unusable. In the 15th century in central Europe, cities came up with the idea of replanting forests. It turned out that the demand for wood in preindustrial metalworking required massive amounts of charcoal. At about the same period in Central America, mercury was used to mine silver to reduce the use of water and wood. But this proved not to be sustainable, mainly due to the impact on the workers’ health.

Nearly two-thirds of the world’s population endure water shortages at least one month a year.

The examples show that scarcity had always led humankind to chart a different course and use a resource more efficiently as its supply dwindles. That means “finite” is a relative term. Sometimes reserves last longer than originally assumed. Or it helps to change perspectives: How crucial is the raw material actually? Do alternatives exist? The examples of water and wood show how diverse the possibilities may be. Raw materials can be replaced. Processes can be changed or tools can be reinvented. It might even be possible to reuse a material. And there is always another question: How much of our consumption is really necessary? Might we be able to set limits on what we consume?

Emerald Isle: Residents in Ireland have made abundant use of wood as a resource for centuries. To the point that woodlands, which covered 80 percent of the island in the distant past, were reduced to just 2.5 percent of its area 350 years ago.

All of this applies to the present as well. People have been projecting the scarcity of oil for a long time, and the world has responded with alternative sources of energy, battery-electric propulsion and fuel cells, not to mention new conveyor technologies and the more economical use of fossil fuels. Sometimes we find that parameters can be changed. For example, forecasts of the world’s population extend beyond the aforementioned year 2050 and suggest that growing prosperity could lead to significant declines in birth rates and thus to a shrinking population long-term. That alone won’t solve all the problems. But it will open up new possibilities.

Incidentally, human labor can be a resource as well, and it is already in short supply in some areas. Similarly, scarcities of nonmaterial resources like time or attention may exist. The year 2020 did an excellent job of surprising us with what we might lack: from medical equipment to toilet paper – or even close human contact. We are sure about one thing, however: It is often possible to manage and offset resource shortages, although not always immediately. And rarely without effort or sacrifice. But scarcity often leads to innovation and economic progress in the first place. Scarcity is a challenge that unleashes creative potential. Have we really exhausted all the options? All the possibilities? Some raw materials may be finite, but the sources of ideas and innovations that solve problems are clearly infinite, as is the range of ongoing social, technical and economic developments. We at Freudenberg Sealing Technologies want to make contributions in these areas. To this end, the latest edition of ESSENTIAL should serve as both an inspiration and an incentive. 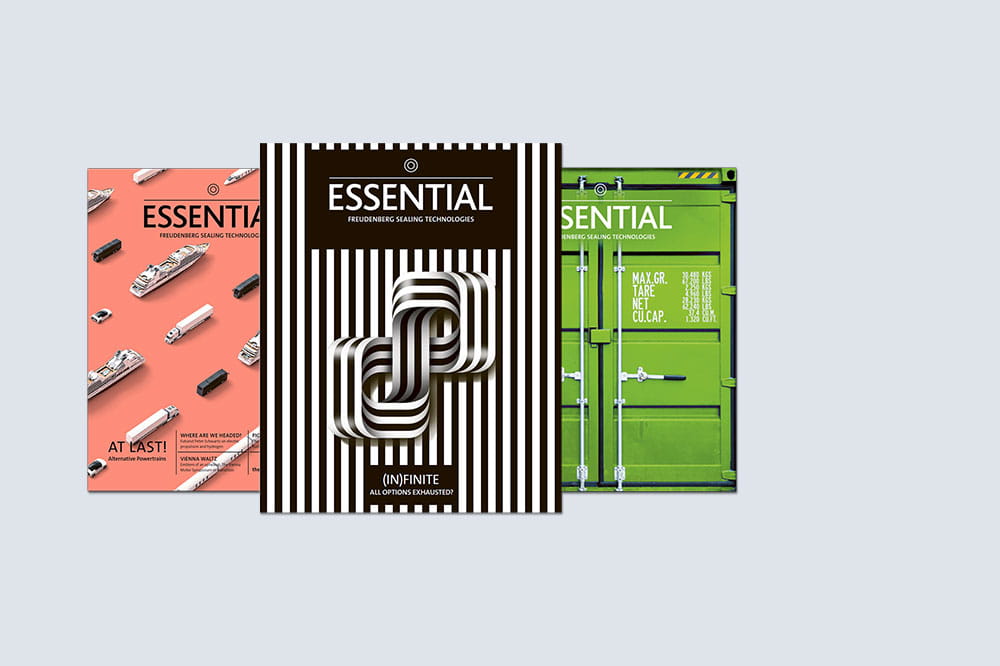 Smart sealing solutions for nearly every sector, technology trends and exclusive interviews – Find them in our company magazine ESSENTIAL with a print subscription and digitally.

Take a look inside!

With a Cold Runner

How quickly an ecologically sound technology catches on - as demonstrated by valve gate injection molding, - depends above all on whether it also offers economic advantages.

A Material on the Move

Bamboo – isn’t it breakable? Not any more than steel. This natural material has been inspiring bicycle designers for a while. A survey of visionaries from Vietnam up to a German world traveler.

Catapulted to the World’s Summit

From not even ranking among the top 100 in the world’s soccer ranking, Iceland has become the smallest nation to qualify for both a World Cup and a European Championship.

Any piece of clothing travels great distances before it reaches a store. Using a pair of jeans as an example, we show how many countries are involved with an item’s production.

At Home in the World

Food. Lifestyle. Films. Culture thrives on variety. But if you’re alert in Morocco, Thailand or Bulgaria, you will be greeted by the familiar.

How Global Am I?

There is hardly a country in the world that closes itself off completely to the global community. But how well are individual countries globalized and how can this be measured?

Twentysomethings are becoming more and more aware that the whole world is open to them. We turned to two of them to discuss their global life. Both began with their participation in our TANNER program.

As regional as possible, as global as necessary – FST Purchasing organizes global procurement along these lines. A look at a radial shaft seal ring made of the fluoro rubber FKM 595 reveals what this means.

“Globalization Is Entering Its Next Stage”

Harry G. Broadman, is convinced the pandemic won’t reverse the course of globalization. An interview on how COVID-19 will alter the world’s system of network trade, business practices and cultural relationships.