On Energy Island No. 1

September 14, 2045. Nero the blogger has reached the first stop on his reporting trip around the zero-emissions world: an artificial island devoted to energy production, erected in the shallow East China Sea off the coast of Shanghai.

Even as comfortable as the arrival in the hyperloop capsule was, my jet lag was unchanged. On relatively long trips eastward, it always hits me especially hard. So it’s a good thing that my boss at ESSENTIAL’s editorial offices gave me plenty of time for research. I used the first few days for acclimatization and adjustment. Avar, my personal AI assistant, put together a tour of Shanghai and along the Yangtze River for me. How great it was to be back in China! Then back to work: At the energy utility Shanghai Electric, I did an interview with its president about his CO2 objectives over the next few years, which, in a very positive sense, are tied to “negative” emissions. In the future, Shanghai wants to bind up more CO2 than it emits. “A fine business model for selling CO2 rights,” Avar said by way of warning: “You sell your articles and need to produce two pieces a month, Nero. So off we go to Energy Island No. 1.”

At the crack of dawn, an electric high-speed ferry took me from Pudong harbor to Energy Island, which was raised in the shallow East China Sea five years earlier. Its position barely 60 km east of the Yangtze estuary was a special advantage: The ocean is less than fifty meters deep there. I breathed in the clear morning air, which tasted of salt, and squinted out at the open sea. As we approached the island, I saw the first signs: floating wind turbines without foundations, standing up from the water on buoys and held in position with ropes anchored into the sea floor. More than twenty years earlier, they were developed for relatively deep water but now are being tested here, above the continental shelf. We traveled past large pontoons made of plastic, on which seemingly endless rows of solar power stations were mounted. On their edges, the pontoons had huge, pneumatic chambers into which the force of the waves was directed. The water streams in and then compresses the air inside the chambers so wind turbines can generate electricity. The ferry soon headed to the small harbor at island’s north end, where Chen Lu was waiting for me. With short, precise instructions, Avar steered me toward her through a small crowd. A young engineer who works for Shanghai Electric, she was asked to give me a tour of the facilities.

“Welcome to Energy Island,” Chen Lu called to me in her nearly accent-free English. As we walked from the gangway toward the bank, she pointed to a row of large turbines just beneath the water’s surface, which surround the artificial island offshore like a coral reef. “That’s our tidal power station,” she explains and then grins: “Here we don’t just use the power of the sun but the moon as well. The ebb and flow drives 1,500 turbines, which are positioned at intervals of 30 meters around the island." Then she focused on the island itself: It is equipped with warehouses, workshops and lodging. To cut down on CO2, the harbor is the gateway to the world. Planes and helicopters only use the airport in exceptional cases, and they have to consume synthetically produced fuel.

Wind turbines keep turning, even when there is hardly any wind

“Hungry?” Chen Lu asked. “A little snack wouldn’t be bad,” I replied, although I would rather have begun the tour immediately. We picked up a few dishes of tempura with rice from a cook shop in the harbor building, and we were finally off: We traveled into the island’s interior on a small electric golf cart. The view was overwhelming: On a wide, gently rising plateau, thousands of windmills were turning in nearly constant rotation, even though there was hardly any wind. “The equipment is built in accordance with the latest zero-friction standard,” Chen Lu said. “There is almost no friction anymore in the individual machine elements. That is why the wind turbines keep turning, even when there is hardly any wind.” Avar had told me earlier about the photovoltaic elements, which are mainly positioned on the island’s southern slope: They produce electricity reliably with even relatively light solar radiation.

“And where is the battery center?” I asked. I was familiar with these centers at facilities in Europe. Chen Lu pointed back to a small building made of gray granite, which we had already passed. “That’s all? It’s that small?,” I asked again. She patiently gave me the explanation: “Our electrical production is 95 percent predictable here. We are familiar with the swells and the tides. The wind turbines turn almost constantly, and the solar power facilities have become much more independent of the weather as well.” Chen Lu turns to face the sun, which is shining down from a nearly cloudless sky. “The battery is just for emergencies. We always deliver the same amount to Shanghai Electric, our lowest output. That is how we supply 150 million households on the mainland.” We arrived at the south coast and looked out at the wide ocean. “And what happens to the surplus electricity,” I asked. Chen Lu points to a medium-sized building, which sits nearly on the coast. "We direct it to our power-to-x facility and use it to produce natural gas and liquid fuel,” she said. “For the airplanes and the heavy-duty trucks on the mainland. And for your vintage vehicles!"

My head was buzzing on the return ferry trip. Bloggers just aren’t early risers. “Avar, did you record everything? I have to write the story tomorrow.” “Sure, Nero,” Avar purred as I slowly dozed off. 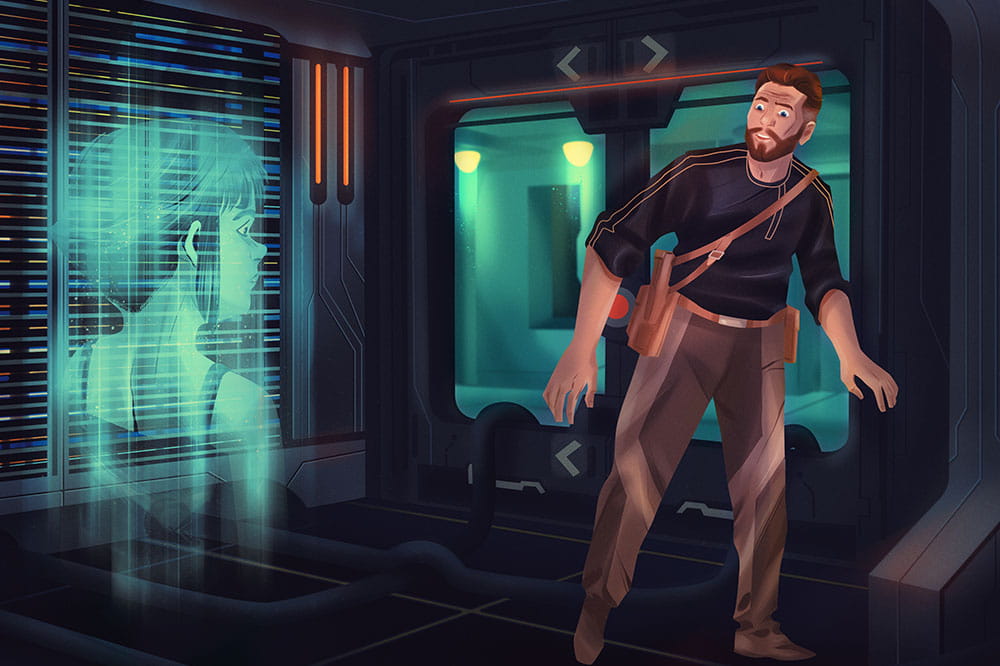 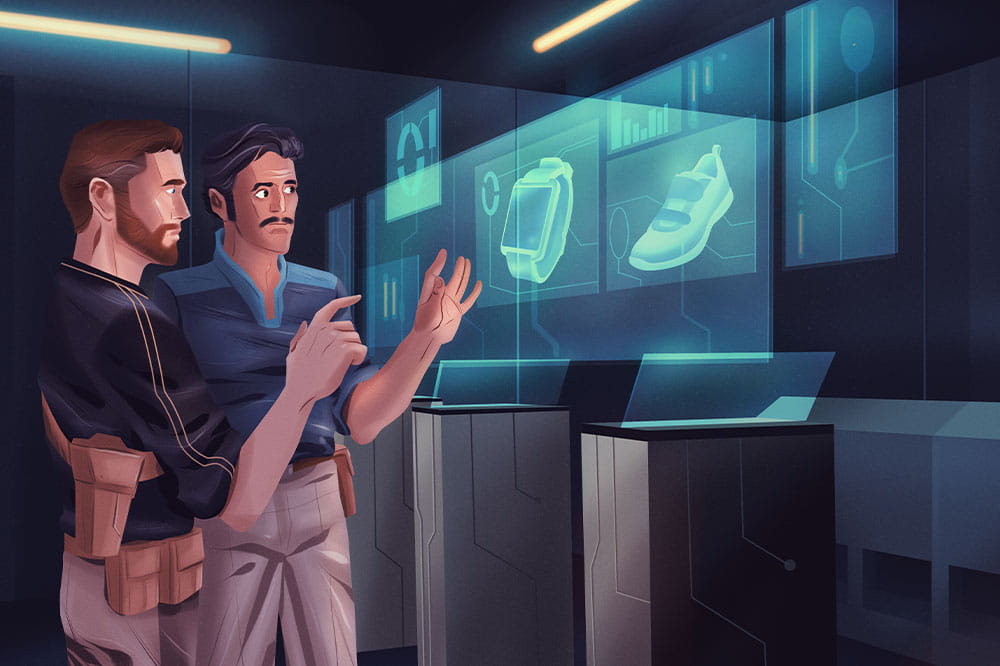 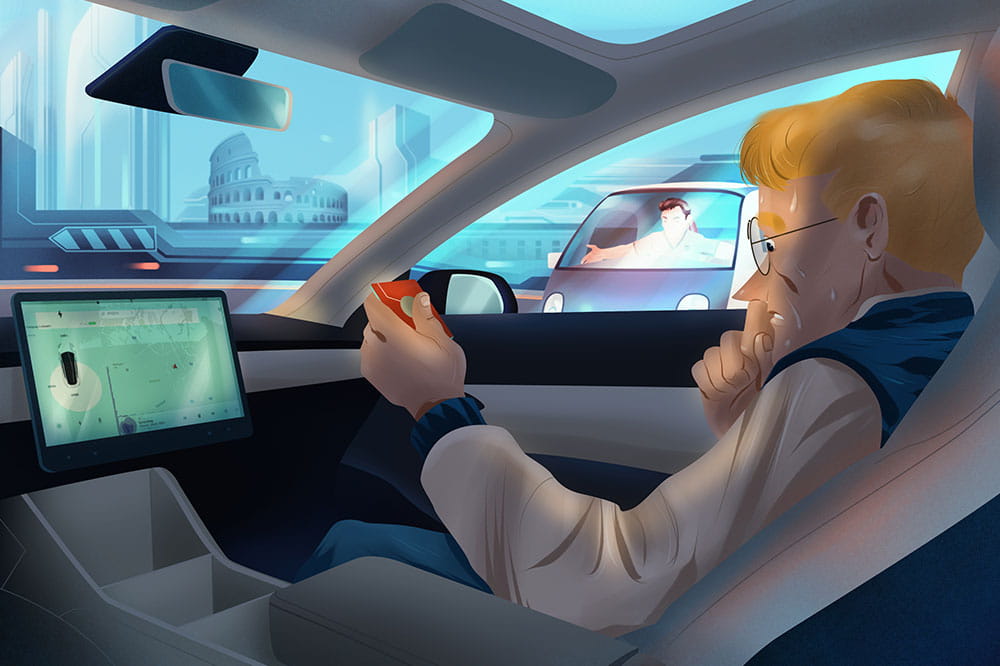 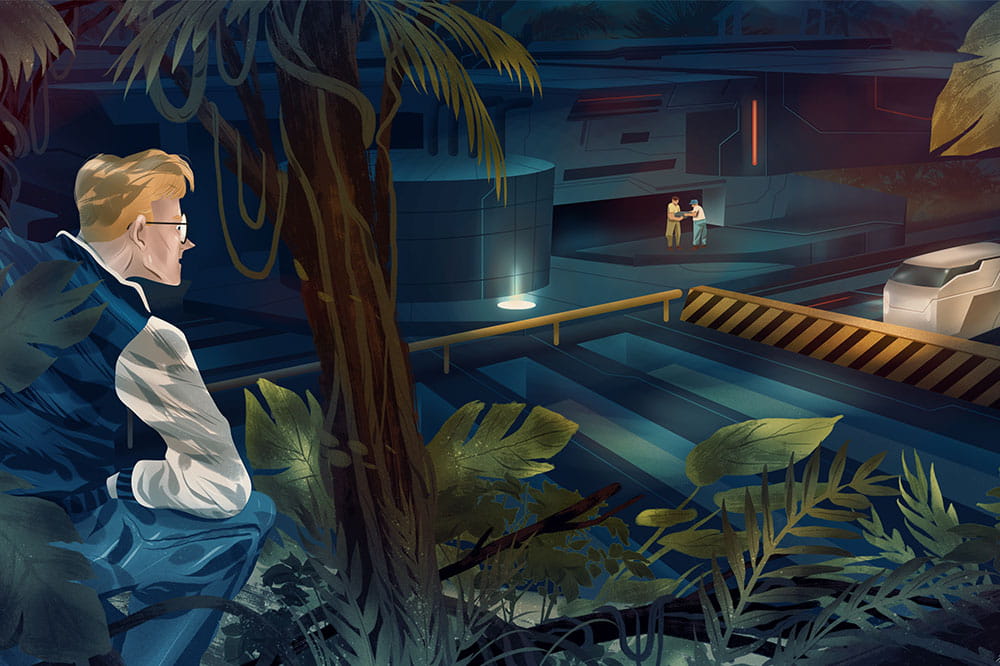 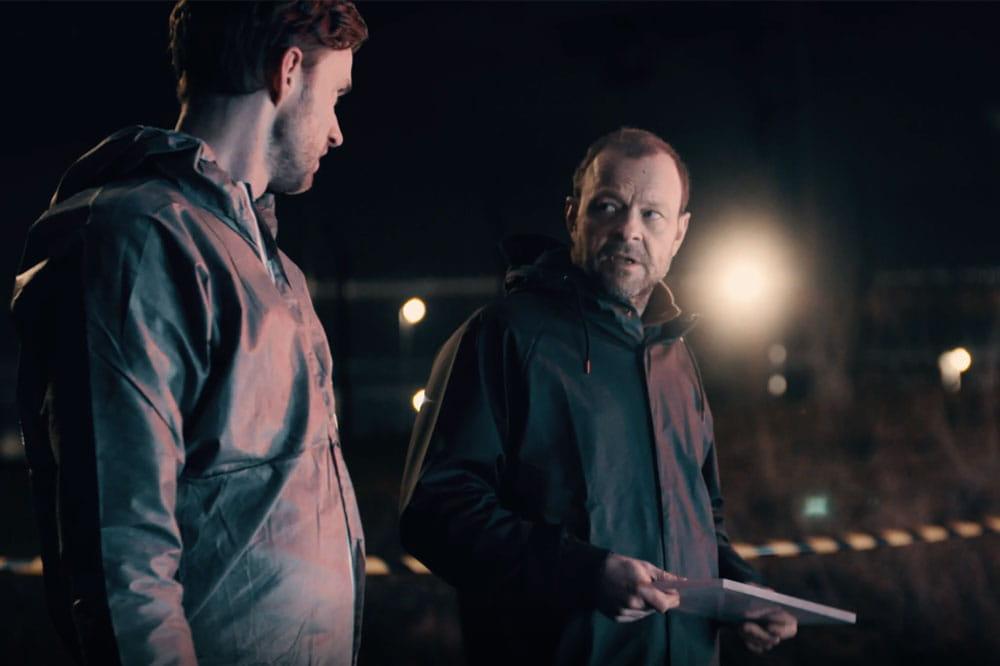 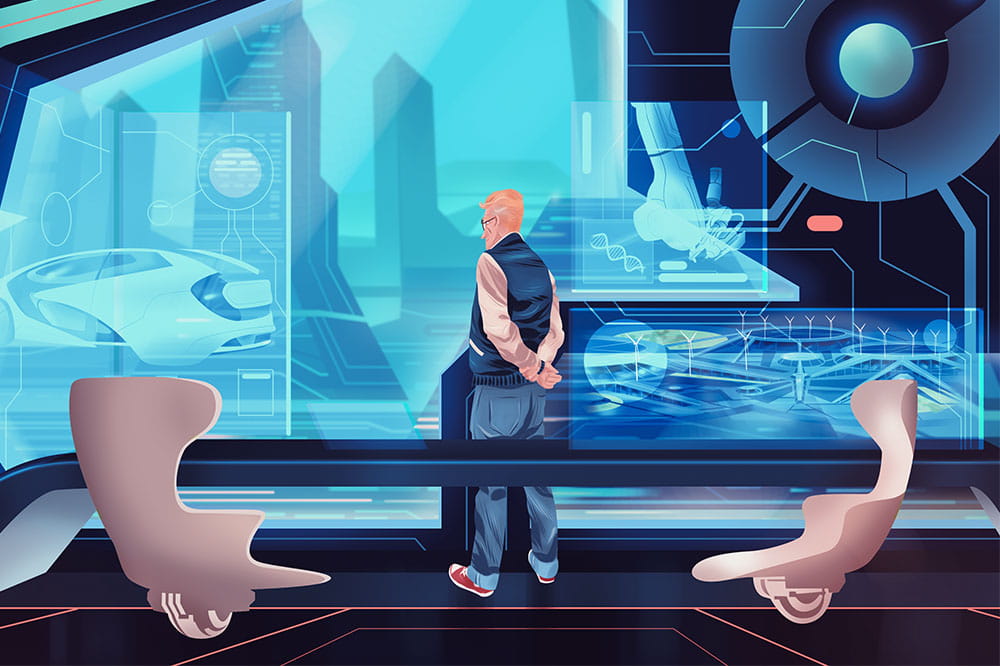 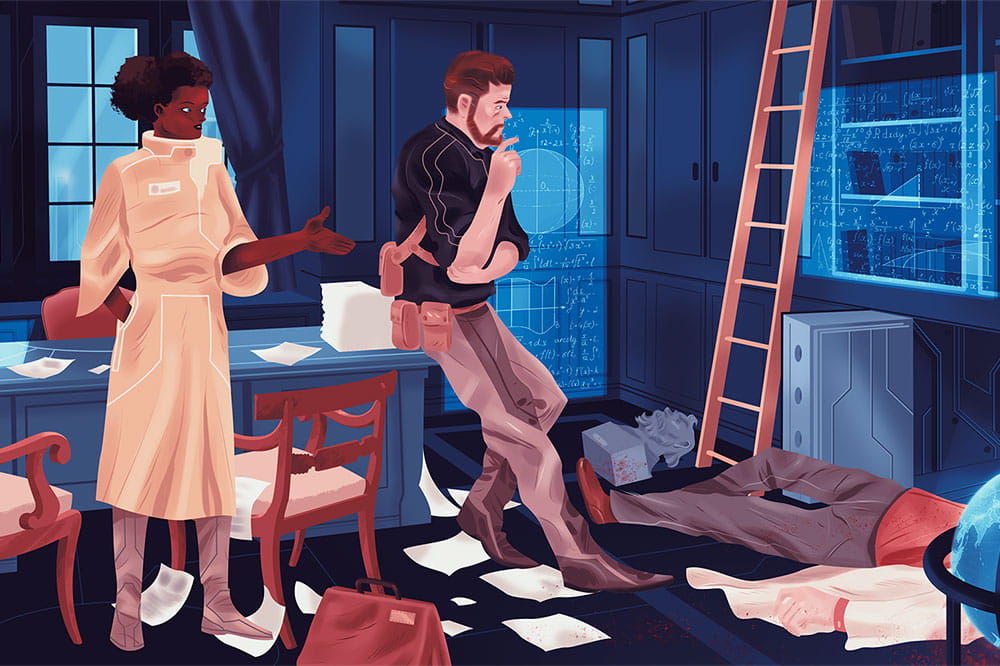 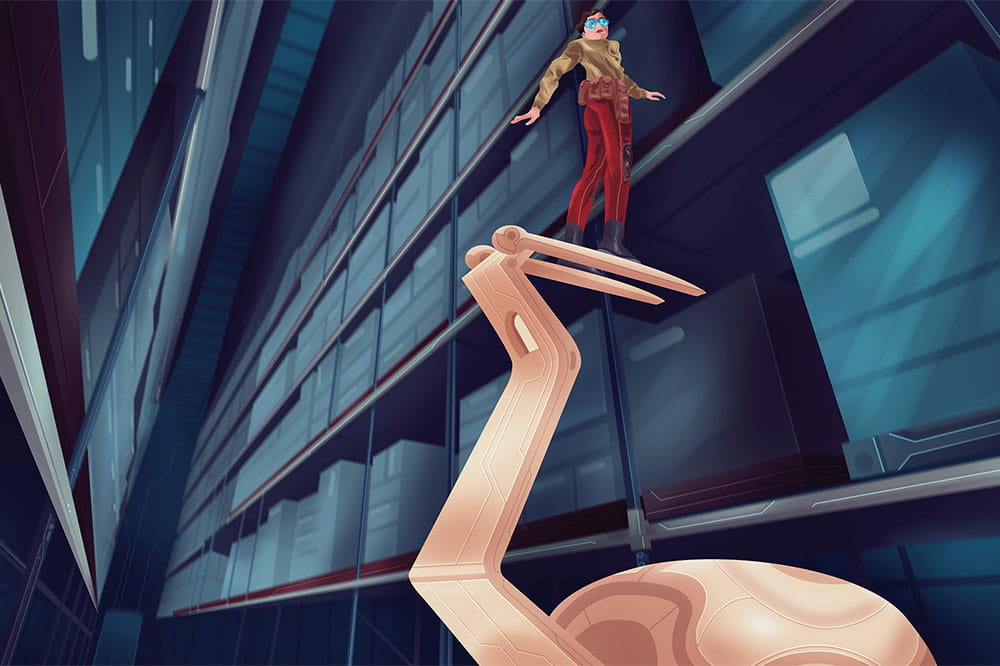