“You have to retrofit it.” The friendly carabiniere grinned at my expression of disbelief and repeated in Italian: “In-stal-la-re!“ He nodded toward a row of workshops that were lined up along the Via Appia Nuova in front of the gates to Rome’s center. They were ready and waiting for customers. It was clear that I was neither the first nor the only driver with the problem. Robo-taxis don’t honk anymore. In fact, they communicate faster than the speed of sound – using the cloud to link up with other vehicles, pedestrians and traffic signs. “Mixed transportation is allowed in Rome, and there are even non-networked traffic elements,” my AI assistant Avar explained and then added soberly: “The Romans say this is one of their basic rights of citizenship.” Well, freedoms usually go hand-in-hand with duties. In this case, the duty to honk their horns. I still don’t quite understand it.

A Horn to Retrofit

I was relaxed until this point. The suborbital parabolic flight from Kuala Lumpur to Taranto by space taxi only took a little more than an hour. I rented a long-distance robo-taxi and, during the afternoon, I was still able to lie on a sandy beach in San Pietro, a seaside resort town 25 miles south of the Apulian spaceport, and swim in the emerald-green Ionian Sea. And now this. Ok, then: “Avar, which workshop has an appointment free right now?” Her response was immediate: “if it is all right with you, we can take the workshop on the right, next to the pizza stand.” That was fine with me, and Avar directed the robo-taxi to the workshop. Everything moved quickly from then on: a mechanic attached small speakers onto each of the car’s four corners with the help of nanoparticles. They bond directly to the body of the robo-taxi. Then he presses something like a remote-control unit into my hand. Really? “Per favore prova questo,“ he said. “You should test it,” Avar said. A signal sounded. I was allowed to proceed.

On the Road to Trastevere

I was traveling to Rome to learn more about Hanna Karlsen. The data activist was found dead a short while ago and had often stayed in Rome over the last few years. Throughout the European Republic, Rome, the capital of the Italian province, is known for its data privacy measures. It is also a hotbed of activism. Using an intermediary, I made contact with “Michele,” who is known by his cover name inside and outside the district. I wanted to meet him for dinner in a trattoria in Trastevere. This neighborhood on the west bank of the Tiber has been considered a gathering spot for activists, dissidents and the counter-culture.

First we had to get there. My robo-taxi set its course for the large traffic circle at the Piazza dei Re di Roma. With a strange stutter and at an unusually slow speed, it drove into the roundabout and intended to occupy the entire right lane. Then the reason for the jerky driving – a death-defying scooter driver – raced by us on the far right, and the robo-taxi swerved to the left. Then we were being overtaken on both sides. Many of the cars changing lanes back and forth in front of us still had steering wheels, and people were driving them at a high speed. By contrast, the robo-taxi was moving more and more slowly and finally only at walking speed. “Nero, the vehicle control system is reporting a malfunction and is driving in creep mode,” Avar said. A drone taxi thundered above us, and I broke out in a sweat. The robo-taxi left its lane. And it finally came to a stop in the roundabout. Traffic was backed up behind us, and we were treated to a chorus of blaring horns. What was I supposed to do then? Instinctively, I hit the button and honked back…

For three decades, artificial intelligence has helped to orient autonomous vehicles to unfamiliar surroundings. First, it helped to interpret image data and consolidate sensor data in a meaningful way so vehicles could identify their environments. Then it added additional information from the cloud to the data – from other vehicles, for example – to enlarge the environment. In addition, AI has long had the ability to make forecasts and predict the behavior of other traffic elements. There is a popular quiz show on the web called “Turn Back,” which shows people in pedestrian zones, department stores or on the beach. At a certain point, the video clip is stopped: Viewers have to compete with artificial intelligence and guess what the person does next. AI almost always wins…

The Limits of AI

Fortunately, the police station wasn’t far from Trastevere. I was able to cover the distance on foot. My robo-taxi was towed away, and the carabinieri almost had to protect me from the furious drivers. The chaos even made the evening news: “Robo-taxi paralyzes Re di Roma roundabout.” That was just too much, I think to myself as I walk across the Tiber on the Ponte Palatino. AI had worked well with mixed traffic, but in recent years, vehicles with steering wheels were gradually banned from major metropolises in the European Republic. “Machine learning can apparently run in reverse as well,” I said to Avar. “You machines can forget things. You forget them when they are not important.” Avar was silent, and a brief wave of superiority came over me. Then I said sheepishly: “Like us humans.”

In Trastevere, I walked through narrow lanes to the Basilica of Santa Maria. I had agreed to meet with Michele here. We had settled on a transparent ribbon – which had become the symbol of data jurists – as a way to identify each other. We went into a nearby restaurant and sat down at a small table outside.
I quickly got down to business: “How well did you know Hanna Karlsen?”
“She always stayed with us when she was in town. We have a small apartment here in Trastevere.”
“The investigative AI used by the police is assuming a suicide.”
“Hanna would never have done that,” said Michele, fixing me with his gaze.
“The detective in charge of the case believes it, too. But AI withdrew his access to the files.”
“The detective should ask himself why it did that,” Michele said. He thought for a moment and then said. “Hanna was here visiting four weeks before her death. When we came home from a restaurant, the apartment was trashed, and all her electronic devices were stolen.
Mine weren’t. The police said it was a typical break-in.” I looked at him quizzically.
“I don’t believe that.” 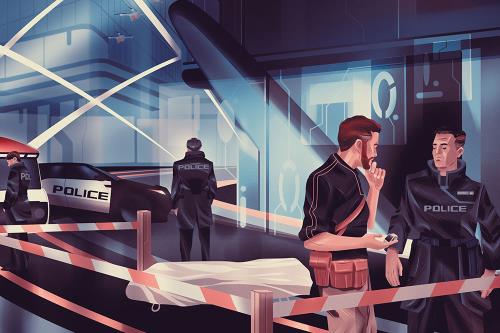 Inspector Lee was facing his trickiest case ever. The AI assistant had explained to him that the death of a political activist was a suicide – with 99.7 percent certainty. But during her lifetime, the anti-digitalization militant feared for her life. She believed the forces of artificial intelligence would exact their revenge. But was it just a conspiracy theory?
Read more 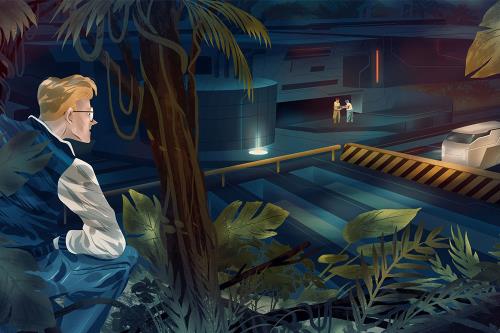 In the year 2048, an investigator encounters a death that seems suspicious. But the artificial Intelligence system in the police computer has a different opinion. A film about digitalization and other future trends as the kickoff for our second “Future Files” article series.
Read more
×